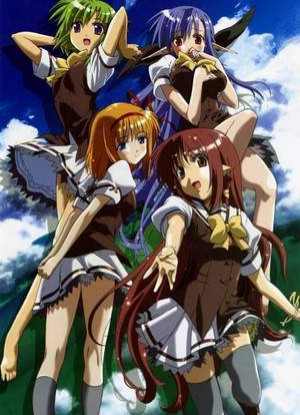 Plot Summary:When two doors are discovered in an ancient ruin, the gateways to shinkai, the realm of the shinzoku (Gods) and makai, the realm of the mazoku (Demons) are irreversably opened. The races of human, shinzoku, and mazoku come together in the mortal world and nothing will ever be the same. One day, two new families move next door to a boy who had previously been living a very peaceful life.

In one house lived the family of the King of the Gods, and in the other lived the family of the King of the Demons. Both families had one daughter whose single wish to live next to the boy they had fallen in love with years ago has just been fulfilled. Also living with the boy is his childhood friend. With these three girls vying for his affections, the boy finds that his new life filled with despair, jealousy, and just a little hope is beginning